Due to the centenary commemorations of the 1916 rising coinciding with St Patricks day, the majority of Irish secondary and primary level students were on the receiving end of nearly three weeks of school holidays. My family and I headed off to Florida on the 15th of March for what has been an unforgettable holiday, and I will be posting about my birding in the coming weeks, This first post will be about the first week, which we spent doing the Universal theme parks in Orlando.

From before we had even left the plane I had started seeing lifers, Double-Crested Cormorant, Anhinga, American Coot and Common Gallinule (Moorhen equivalent), all before we had even taxied off the runway! On the taxi ride to the accommodation I saw my first osprey sitting on its nest on the top of a roadside billboard, Common and Boat-Tailed Grackles were quickly totted up too. By the time we had got to the hotel we practically collapsed with exhaustion from the early start and long flight.

First morning in the states and we got up early, an easy feat considering we were still on Irish time. I found a nesting Mourning Dove and saw my first Palm Warbler on the short walk to breakfast. A male Mottled Duck/Mallard hybrid was swimming around the early bathers in the swimming pool with its mate. After breakfast I went along the "Universal Garden Walk", the fifteen minute walk to Universals CityWalk and Universal Studios resorts from the hotel. As this first week was mainly for the theme parks this small stretch between the hotel and parks was where I did the first of my US birding, and I managed to eek out a decent number of new birds from the meagre habitat along this stretch.

On this first morning Blue Jay, Grey Catbird (or as they say there, Gray), Fish Crow, Yellow-Rumped Warbler, Yellow-bellied sapsucker, Northern Cardinal and White-Winged Dove were some highlights. The Sapsucker was exceedingly tame and a nice introduction into the New World woodpecker family. Over the week I had three different individuals along this stretch.

Later on that day the family decided to go to the Florida Mall, I carted the bins along just in case, and made sure to grab a window seat in the taxi. Not one of my worst ideas, that half an hour trip through rush hour Orlando traffic was surprisingly fruitful, on which I saw Red-Tailed and Red-Shouldered Hawks, Black and Turkey Vultures and Loggerhead Shrike. As I was watching the Shrike on a roadside wire through the binoculars I noticed something in my field of view directly behind it, I focussed in and saw my first Swallow-tailed kite!!! One of my main targets for the trip! I watched this stunning raptor briefly gliding and hunting before my view was obscured by a massive truck.

Over the next few days along the garden walk I saw nearly another 40 species, not much, but not bad for the middle of an urban landscape. Some highlights from this area for me included a low flyover subadult Bald Eagle, finding my first Prairie and Black and White warblers, Northern Parula, Brown Thrasher and Carolina Wren.
A preening Limpkin on a tiny pond was another cracking bird, and was very approachable, allowing me to sit quietly not 5 metres away as it preened for about fifteen minutes.
And not to mention the novel joy of being able to bird in 30°C temperatures in shorts and t-shirts! 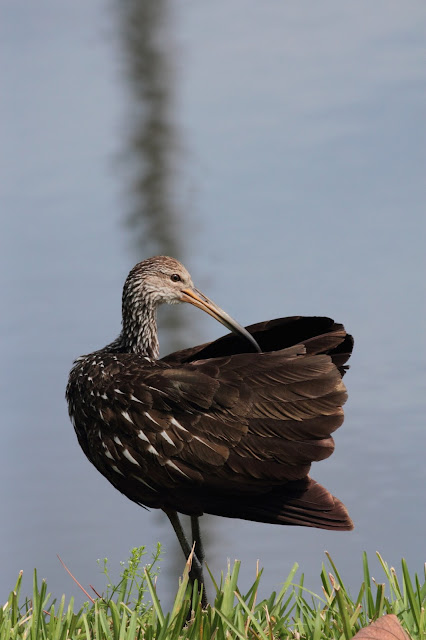